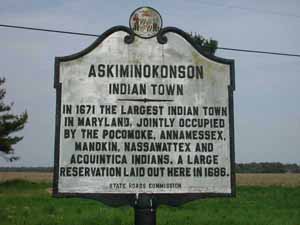 By 1671, Askiminokonson proved to be the largest Native American town in what is now the State of Maryland. Indigenous peoples from various communities, including the Pocomoke, Annamessex, Manokin, Nasswattex, and Acquintica, lived here. Mention of Askiminokonson appears multiple times in the “Proceedings of the Council of Maryland, 1667-1687/8” archival record, particularly in relation to efforts to set aside reservation lands exclusively for Indigenous occupancy. This document assigned settler representatives “to meete, consult and enquire into the premisses and to allot and ascertaine to the said Indians such a quantity or portion of land in such place as to them […] 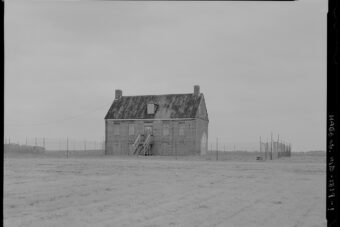 The Handsell Historic Site pays tribute to the Nanticoke and Chicone peoples upon whose lands the Handsell House now sits. Located in what is now Dorchester County, these lands were formerly incorporated into a Native American reservation. The State of Maryland agreed to use the lands for this purpose in 1720, but in 1768, less than fifty years later, the state legislature approved a law that allowed for the purchase of these and all remaining Chicone lands. The Nanticoke River, dividing Wicomico and Dorchester Counties, is named for the Nanticoke peoples. The nearby Choptank River, located in Caroline, Dorchester, and […] 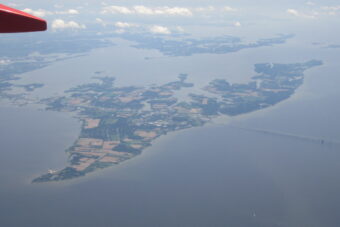 Settled in 1631, Kent Island was the third oldest English settlement in the United States, following Jamestown, Virginia and Plymouth, Massachusetts which were established in 1607 and 1620, respectively. The land was occupied for approximately 12,000 years prior and it was the homeland of the historic Matapeake community at the time of colonization. The Matapeake and Susquehannock group traded pelts with English settlers and reportedly sold Kent Island to the English for 12 pounds of trade goods. Native peoples established settlements primarily along the southeastern coast of the island but later transitioned their homes to the northern side as the […] 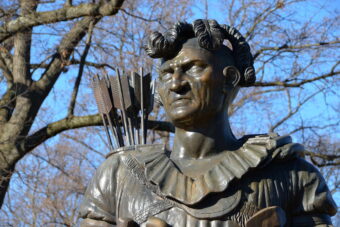 In 1866, the United States Naval Academy in Annapolis, Maryland (Anne Arundel County) received the USS Delaware figurehead featuring Chief Tamanend of the Lenni Lenape, or Delaware, people. Tamanend rose to national prominence after leading peaceful relations with William Penn. The ship had been purposefully sunk to prevent Confederate soldiers from acquiring it during the Civil War, but the wooden figurehead was able to be recovered from the shipwreck. The original figurehead remained on display for 64 years.  In 1930, the Naval Academy Class of 1891 sponsored the creation of a bronze replica in order to better preserve the campus […] 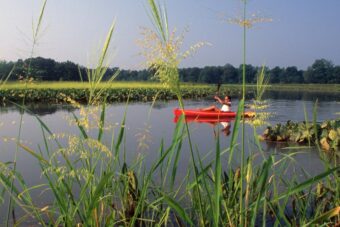 Indigenous peoples representing various tribal communities occupied the Patuxent River and Jug Bay areas from approximately 8,000 BC until they were pushed out by colonizing forces in the mid-17th century. Nevertheless, historians have identified it as one of the final major riverways in the state to come under the control of the English. This lush river and bay provided an ideal location for semi-permanent villages due to the abundance of wildlife and resources provided by the natural environment. In 1608, Captain John Smith particularly noted the settlements of the Acquintanacksuak, Pawtuxunt, and Mattapanient peoples.  Archaeologists have uncovered thousands of Woodland […] 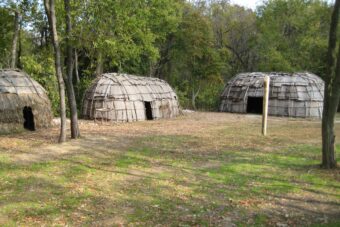 Jefferson Patterson Park and Museum sit on land believed to be the former Indigenous town of Quomocac. Quomocac appears on Captain John Smith’s 1612 map of the Chesapeake, and would have been established by the Patuxent community from the Middle Woodland period (50-950 AD) until contact with Europeans. Archaeological evidence reveals that Native peoples grew corn, beans, and squash–an Indigenous agricultural technique known as the “Three Sisters”–for over 1,000 years at this site.   The discovery of a Middle Woodland period blade cache in 1980 prompted the creation of the Jefferson Patterson Park and Museum and, in 2007, it erected a […] 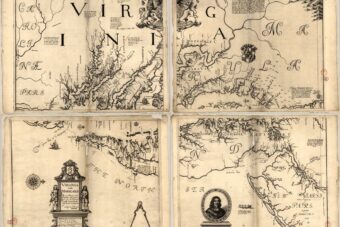 Some historians consider Choptico Manor the first Native American reservation in the United States. The 8- to 10-thousand acre territory was set aside for a handful of Indigenous groups–“the Mattapanians the Wicomocons the Patuxants the Lamasconsons the Kighahnixons and the Chopticons”–in 1651. Spearheaded by the second Lord Baltimore, Cecil Calvert, this location is also known as Calverton Manor. The plan for the allotted land was to assign 200-acre parcels to leaders of the six resident tribes, and 50 acres to each individual. The purpose of this reservation was to bring Native peoples under the control of the colonial government, convert […] 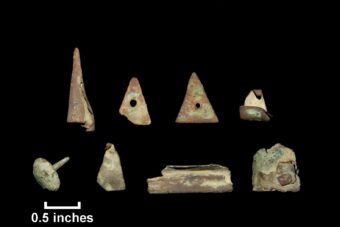 In 1680, more than 300 Piscataway left their home in Mayone and relocated to Zekiah Fort in order to seek refuge from Susquehannock attacks. Lord Baltimore established the fort adjacent to his 8,800-acre Zekiah Manor estate, which bordered the 22-mile long Zekiah Swamp, after the Piscataway rejected proposals to migrate to Maryland’s Eastern Shore. The Piscataway community remained at Zekiah Fort for between ten and fifteen years before dispersing.  Following abandonment of the settlement, the precise location of the site disappeared from public knowledge. Researchers began searching for the historic fort in the 1930s, but were unable to find it […] 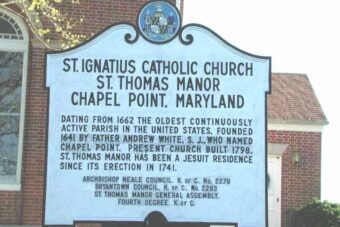 St. Ignatius is the longest continually operating Catholic parish in the United States. Established in 1641, this house of worship has maintained a deep connection to local Indigenous communities and held significance for Native Catholics across North America. The Jesuit founder, Father Andrew White, lived near an Indigenous settlement at Chapel Point and spoke their language. A stained glass window inside the church depicts Fr. White and baptizing a Piscataway “Indian King” into the faith on July 5, 1640. The birth and baptismal records generated by the church from the 19th and early 20th centuries have offered unique genealogical records […] 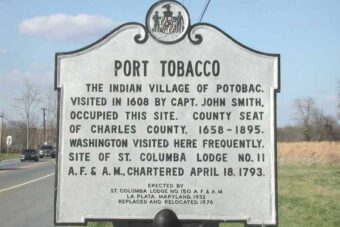 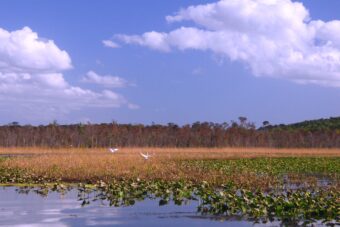 Present-day Mattawoman Creek takes its name from the historic Mattawoman community that resided in villages and towns along the waterway. Nevertheless, various Indigenous groups in addition to the Mattawoman frequented this area prior to and in the immediate aftermath of European colonization. For instance, Mattawoman Creek also outlined, in conjunction with Piscataway Creek, the boundaries of lands that were set aside for the establishment of an Indian reservation in the late 1660s which would have been heavily occupied by Piscataways. The Algonquian word, “Mattawoman,” roughly translates to, “a place to go to quietly,” which may reflect its significance as a […] 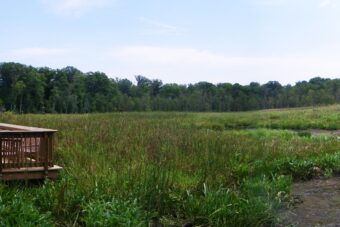 Piscataway Park takes its name from the Piscataway peoples who have historically occupied the territory now known as the State of Maryland and who maintain a contemporary presence here. The Park is made up of approximately 5,000 acres oriented around Piscataway Creek and the Potomac River, in Prince George’s County. Native communities have lived in this area for more than 5,000 years and Moyaone, a site within Piscataway Park along Piscataway Creek, was the location of the largest Piscataway community at the time of European contact. For these reasons, the Park area is considered the ancestral homeland of the Piscataway, […] 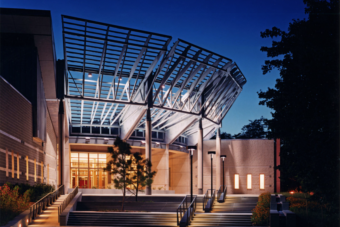 The Cultural Resources Center in Suitland, Maryland is one of three facilities making up the Smithsonian’s National Museum of the American Indian. This branch is specifically responsible for research surrounding the Museum’s collections. In all of its work, the Cultural Resources Center is guided by Indigenous methods, which respond to tribal communities’ needs for access to specific objects, use culturally-sensitive approaches to handling and storage, and take seriously the need for Native-centered presentation of the materials. On site, the Vine Deloria, Jr. Library, named for leading Indigenous intellectual Vine Deloria, Jr. (Lakota), offers over 40,000 resources specialized in Native American […] 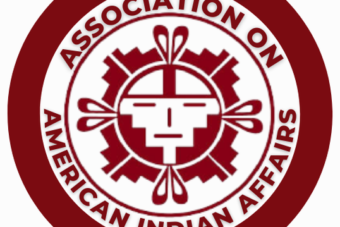 For over 100 years, the Association on American Indian Affairs (AAIA) has served tribal communities across the United States. It is the oldest and longest-running non-profit organization dedicated to upholding tribal sovereignty and self-governance, protecting and preserving Indigenous cultures, educating public audiences on issues of importance to Native communities, and building capacity for advocacy work in Indian Country. Founded in 1922, the Association was established in the midst of federal policies designed to assimilate Native communities into Euro-American society, dissolve tribally-held lands and land rights, and terminate tribal political power through the dissolution of tribal governments. The AAIA is operated […] 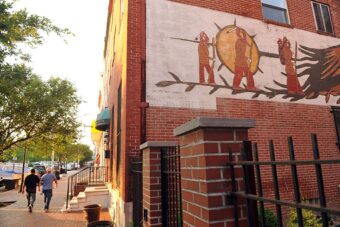 In the mid-1900’s, Baltimore emerged as an urban hub for thousands of Lumbee community members who relocated to the area following hopes of employment and economic opportunity. The Lumbee Tribe is headquartered in North Carolina, but the establishment of a Lumbee neighborhood in east Baltimore earned the area between Upper Fellos Point and Washington Hill the nickname, “the reservation.” Although this history has largely fallen out of popular knowledge and Baltimore’s Lumbee population has dispersed throughout the area, the Baltimore American Indian Center maintains its office in this historic neighborhood and continues to serve the city’s urban, intertribal community. To […] 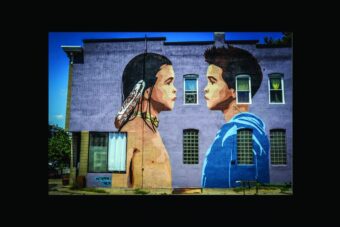 The Duality of Indigeneity Mural

Pyramid Lake Paiute artist Gregg Deal installed The Duality of Indigeneity in Baltimore, Maryland in 2015. This piece, like all of Deal’s critically acclaimed work, drew inspiration from paying homage to Indigenous lived experiences, confronting stereotypes, and critiquing representations of Indigenous peoples across popular culture and political issues. Reflecting on The Duality of Indigeneity, the artist challenged viewers to consider which of the two male figures depicted–one with long hair and one with short hair–is more Indian. “The answer,” Deal offers, “is that they’re both Indian.”  Deal completed this piece as part of his Baltimore-based HOME artist residency. His work […] 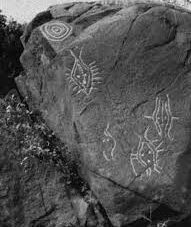 Native communities routinely utilized the area currently known as the Bald Friar Ford to wade in and cross through the Susquehanna River. The river itself is named after the Susquehannock peoples. Although it is hard to imagine now, since the flooding of the land and the construction of the Conowingo Dam beginning in 1927, this territory was utilized in such a manner due to its shallow waters. Local tribes also adorned numerous boulders sitting in the river at this point with massive petroglyphs. The same year of the Dam’s construction, preservationists removed the ancient petroglyphs from their original homes in […] 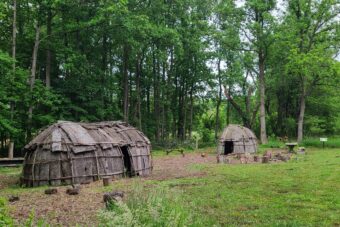 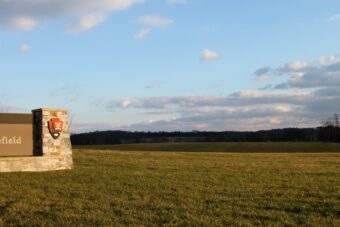 Nearly a dozen archaeological sites related to Native peoples have been discovered on the grounds of the Monocacy National Battlefield, and many others–relevant to a number of tribal nations–have been discovered throughout the Monocacy River Valley at large. Studies suggest that the earliest inhabitants of the area resided here up to ten thousand years ago. For this reason, the National Park Service declared it to be an “outstanding archaeological resource of national significance.” This site is also well known for the 1864 Battle of Monocacy, otherwise known as the “Battle that Saved Washington,” which unfolded here and played a significant […] 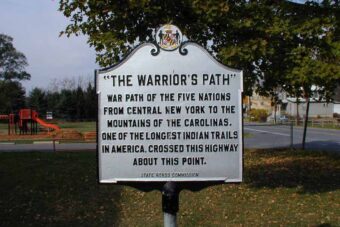 The Warrior’s Path historical marker sits in Allegany County. The State Roads Commission installed the sign in 1938. The Warrior’s Path–a route utilized by diverse Native communities for trade, politics, and relocation–stretched hundreds of miles from present-day New York State to the Carolinas. Its course followed the Susquehanna River to the territory north of Harrisburg, before crossing through central Pennsylvania in a southwestern direction until it met with the northern branch of the Potomac River near Cumberland, Maryland then continued along the eastern side of the Appalachian Mountains. Use of the path can be recorded at least to the early […] 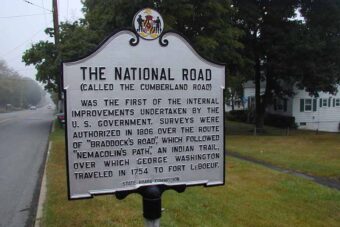 While this historical marker is titled, “The National Road,” it could easily be renamed “Nemacolin’s Path,” as well. This is because the trail which became known as the National Road–and at other times, Braddock Road, Cumberland Road, US Route 40, or US 68–was created by the Delaware leader Nemacolin. It went on to be the first national pike, connecting Baltimore to more western outposts such as Pittsburgh. The path originated near present-day Cumberland, Maryland, and traversed Haudenosaunee and Delaware lands, through the Appalachian Mountains, to what is now Pittsburgh. This trail also holds national significance as the road taken by […]